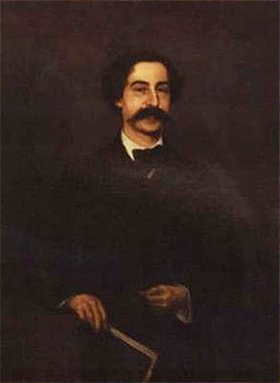 Jacques François Joseph Carabain, or Jacob Frans Jozef Carabain (23 February 1834, Amsterdam - 2 January 1933, Schaerbeek) was a Dutch-Belgian painter, known primarily for his scenes of cities and buildings in the Romantic-Realist style. He was especially interested in Medieval and Baroque structures, and was often attracted to busy market places.

He began his studies at the Amsterdamer Kunstakademie, where he initially painted landscapes and seascapes as well as cityscapes. His teachers there included Jacobus Schoemaker Doyer and Valentijn Bing. His first major showing was at the Exhibition of Living Masters in 1852. He lived in Amsterdam until 1856, when he travelled throughout Europe, then lived in Brussels for a short time before settling in Schaerbeek. It was there he began specializing in cityscapes and was influenced by François-Antoine Bossuet.

Work of Jacques Carabain in the library