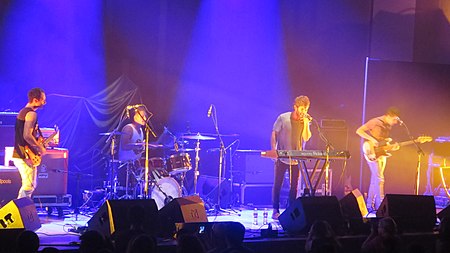 After their debut single "Dreaming" charted at number one on The Hype Machine, Smallpools' self-titled debut EP was released via RCA Records on July 16, 2013.

Mike Kamerman, from Marlboro, New Jersey and Sean Scanlon, from Verplanck, New York, had been playing in various bands since 2007. After relocating to Los Angeles to further their musical careers, they met Oregon natives Joe Intile and Beau Kuther. Working with producer trio Captain Cuts, the band released their debut single "Dreaming" online on May 16, 2013, quickly reaching the #1 position on the Hype Machine, #1 on Sirius XM Alt Nation (Alt 18 Countdown), as well as reaching #23 on Billboard's Alternative Songs chart. The song was released as the first single off their debut self-titled EP. "Dreaming" was featu…Read more on Wikipedia

Work of Smallpools in the library