An acclaimed and multi-awarded film director who dominated the Greek art film industry from 1975 on, Angelopoulos was one of the most influential and widely respected filmmakers in the world. He started making films in 1967. In the 1970s he made a series of political films about modern Greece.

Angelopoulos' films, described by Martin Scorsese as that of "a masterful filmmaker", are characterized by the slightest movement, slightest change in distance, long takes, and complex, carefully composed scenes. His cinematic method is often described as "sweeping" and "hypnotic."

In 1998 his film Eternity and a Day went on to win the Palme d'Or at the 51st edition of the Cannes Film Festival, and his films have been shown at many …Read more on Wikipedia

Work of Theo Angelopoulos in the library 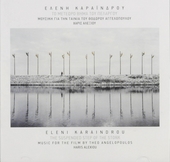 The suspended step of the stork

Ulysses' gaze : music for a film by Theo Angelopoulos

Eternity and a day : film by Theo Angelopoulos